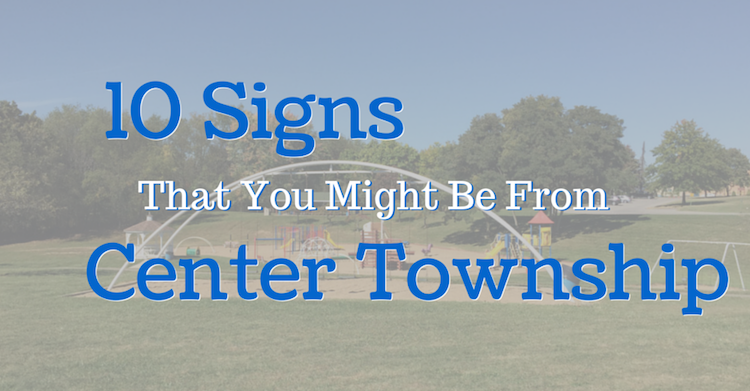 Calling all snobs, arrogant, and stuck-up people! Do you think your township is superior to others in Beaver County? Great! Then you’re probably from Center.

While this is the reputation most people from Center get (I’m allowed to say that since I’m guilty by association), most residents and people who grew up here know this isn’t true.

Aside from the stereotypical haughtiness, here are 10 signs that say you may be from Center Township

1. In middle school, you went to Center Stage dances and walked to King’s afterward.

One Friday a month, all 6th, 7th, and 8th graders gathered to “dance” from 8-10pm and the cost was $5 to get in. Dancing was more like socializing, and of course, all boys on the left, all girls on the right. Did anyone actually ever shake their tail feather? Other schools used to be allowed to come until there was a huge fight one night, and from then on it was Center students only.

2. You remember the Fireman’s Fair held every summer.

I loved this little carnival. The Fireman’s Fair was held on the soccer fields behind Center Grange Elementary School – another memory that can be added to this list. The single circle rollercoaster and the giant Ferris Wheel were always my favorites!

3. Parading down Center Grange Road on opening day was the best part of baseball season.

Does this even need an explanation? Who doesn’t remember walking down the street by league and then again by carbonated-soda-team-name? Coke, Welch’s, Sprite, Minute Maid…

4. You are/were a member of Chapel Valley Pool.

And every year on Memorial Day you were standing on the edge where the cement meets the water counting down from 10 with the lifeguards. When “one” hit – you cannonballed right in! And if you jumped in before the countdown hit “one,” you probably got “benched.”

5. Club Alcatraz was the place to be when you were in high school.

The under 21-dance club was the hottest club to hit Beaver County. It was where you went to see and be seen. If the Kardashians lived in Beaver County at the time, they would have been sipping Sprite in the DJ booth. It resided in the plaza that is now home to the bus station, right off the Center Exit.

They closed their doors in 2000, but the memory lasts forever – especially if you still have your membership card.

6. You spent Friday nights in the fall watching the Trojans and eating at Bowser’s or Eat’n Park after the game.

Everyone knows what happened to the Trojans, and while they now make up 50% of the Warriors, 100% of Bowser’s and 100% Eat’n Park remain the same: high school after dark.  I’m sure if you went to either restaurant at 10 pm on a Friday during football season, you will be among a sea of Navy and Carolina Blue.

7. You remember going to the movies when it was “Movie World.”

And you remember when it was over in the Wal-Mart plaza. Speaking of Wal-Mart…

We’re going waaaay back here. Gee Bee closed in 1989, but every now and then I’ll still hear someone call it that.

9. You’ve been to at least one birthday party at “the park.”

Or a graduation party or just because you and your friends are bored and needed something to do. And if you know what I’m talking about by ” the park,” also known as Fred Taddeo Memorial Park, then you also probably crawled through the underground tunnels that no longer exist. Yes, the ones that smelled like sewer.

10. You know at least one person that lives in “Stobo.”

That other side of Center Township where no one really knows what goes on over there and no one really questions it either. When a resident gets asked where they are from, the answer is never Center. It is always, “Stobo.” It’s kind of it’s own territory.  I won’t be surprised if Stobo removes itself from Center Township and forms its own community. Stobo is quite simply a way of life.

If you’re from Center Township, do you have any to add to this list?!