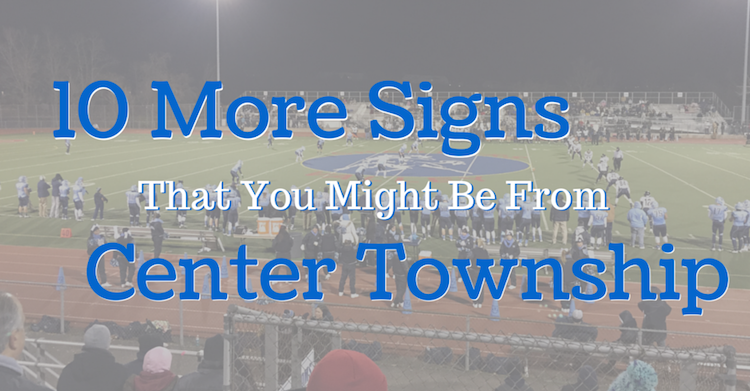 I thought growing up in Center was the absolute greatest thing in the world. I felt lucky to live so close to my friends, the baseball fields, the high school, and my church. Even though I now live in Hopewell, I still think Center is a great place to live and raise a family.

While the first ’10 Signs’ was more “new school,” this list is a tribute to those from the “old school.” So without further ado…

1. When you were in high school, you had parties in the “Mutes.”

The “Mutes” is now the area home to Brookhaven Estates, the swanky, upscale neighborhood across from the old Chapel Superette, another Center throwback, off of Geneva Drive.

Before the pricey neighborhood was constructed, kids from the Woodhaven and Chapel Valley neighborhoods would flock to the Mutes on the weekends and do, well, illegal things. I have no idea how the name originated, but it lives on in Center lore.

2. Your favorite bar was the Barn.

The Barn was one of the most popular, notorious bars in Center. It still exists today, but most people know it as Paradise Pub. I remember being in the Barn as kid after baseball games, and vaguely remember some details. But before Bowser’s, Applebee’s, and Cactus Jack’s, the Barn was the place to be after football games.

3. You remember when Lindy’s had a miniature golf course and served ice cream.

What’s Lindy’s, you might ask? Well, it’s now called Papa Dukes, located at the intersection of Brodhead and Center Grange Roads. Lindy’s was a popular establishment that existed for many years.

I remember Lindy’s having great breakfasts, and we always sat in the back because it was the ‘non-smoking’ section. Lindy’s used to have a miniature golf course around back, and also served ice cream from one of the front windows of the store.

4. The Winter Olympics was your favorite day of the year in high school.

The Winter Olympics was a tradition at Center High School that spanned decades. Everyone looked forward to the day before Christmas break, when all four classes would compete against each other in a number of events that was organized by Mr. Bickerton.

The CHS gymnasium basically transformed into the Roman Coliseum, when each class would walk out of the locker rooms or hallways to the chants and cheers from hundreds of their friends. The biggest thing was designing your grade’s t-shirts to see who could come up with the cleverest slogan.

5. You partied in Grimm’s Field or at the “sewage plant.”

Like the Mutes, Grimm’s Field was another popular destination for underage Center kids. It’s located in the Bunker Hill area of Center, behind the old Rebich Beer Distributor (now Cabinet World) overlooking Route 376. Grimm’s Field is named after the Grimm family that lived in the area.

As for the “sewage plant,” older Center residents have told me this was their off-site party destination. The “sewage plant” wasn’t actually the real sewage plant, rather a name that was given to this wooded area near Trinity Drive and Whitehall Avenue. “Generations of Center kids partied here,” one Center native told me.

6. You couldn’t wait for the St. Frances Cabrini Carnival as a kid.

The St. Frances Cabrini Carnival was one of the tops in the area in its prime. Booths were set up all around the church parking lot. Hundreds of people flocked to Trinity Drive and Chapel Road to hit up the gambling booths and small games of chance.

There was also a merchandise bingo, spaghetti dinner, and various kinds of entertainment. I remember the Jaggerz singing there years ago. (Bonus points if you attended St. Frances Pre-School as a kid!)

7. You spent every single day of your summer vacation at one of the parks.

Before the days of Atari, Nintendo, and Sega Genesis, kids that lived in Center went to the township parks every day during the summer. The main park was and still is the municipal park, also known as Fred Taddeo Park, but smaller parks also existed in Sylvan Crest, Sherwood, and other neighborhoods.

At the parks, kids played from sun up until sun down. Pick-up baseball and basketball games were common, and disputes were settled right then and there, without the interference of parents. These were the glory days of Center Township.

8. You’ve played a round of golf at Pettibon’s Golf Course.

Ok, I’m going wayyy back here. As in, before the Beaver Valley Mall was built. That’s because Pettibon’s Raccoon Golf Course sat where the mall now stands between 1937 and 1965.

Before the explosion in the popularity of the sport, in the days of Ben Hogan, Arnold Palmer and Jack Nicklaus, residents of Center used to hit the links at Pettibon’s. The next time you are at the mall, envision a plush golf course on the property.

9. You were a regular at Chapel Superette or Testa’s.

And you bought Tarquinio bread at either one. Chapel Superette was a convenience store off Chapel Road across from Geneva Drive. If you lived in Woodhaven or Chapel Valley, you went to the “little store” to get your lunchmeat, bread, milk, cigarettes, candy, etc. The building still stands today, albeit vacant.

Testa’s was a popular Italian market on Brodhead Road next to Center Lanes. Testa’s had all the good homemade Italian food you would eat at grandma’s for Sunday dinner. It later became Lombardi’s, and now the building is in the process of being torn down.

10. Getting a snow cone from Mr. Bickerton was a big deal.

As one commenter wrote on YBC, “Mr. Bickerton is an icon.” He most certainly is a living legend.

Not only was he one of our favorite teachers in high school (America As a World Power was one of my favorite classes ever), he was also the director of student activities, and sold snow cones out of the back of his truck (or if you are old enough to remember his station wagon) in the summer.

You anxiously waited outside of your house for red truck and the jingle of the bells. You could get the regular size or the “iceberg” with all kinds of flavors – root beer, cherry, grape, lime, etc. And every 25th snow cone was a freebie.